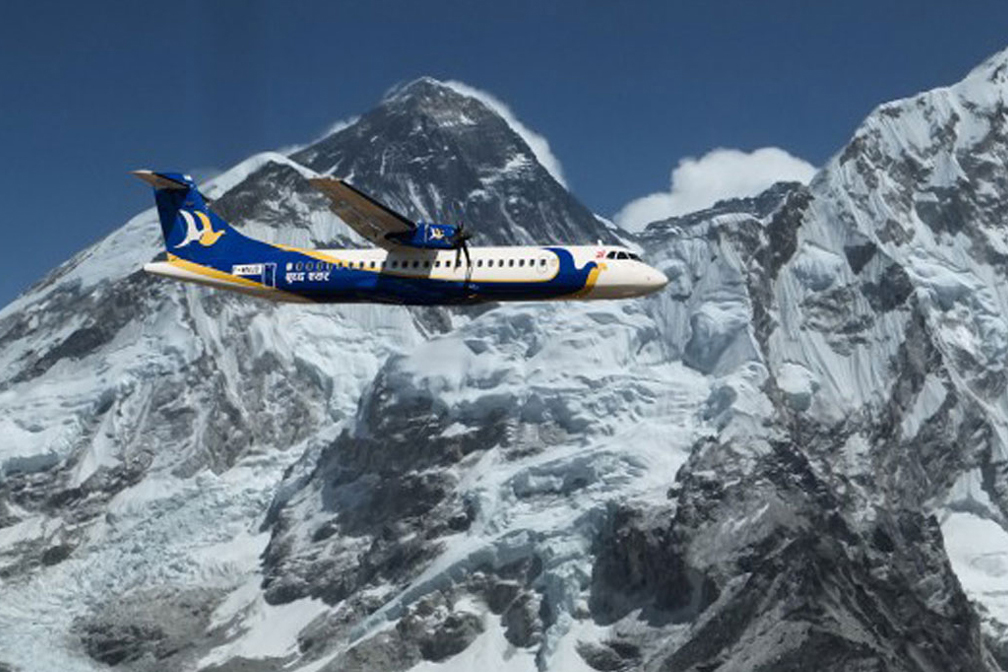 Walk Mountain offers daily flight for those who are restricted by time from going trekking can get panoramic view of the Himalayan in just an hour. Early morning we pick you up from your hotel and drive to Kathmandu domestic airport, take-off from Kathmandu airport in the early morning for an hour’s worth of spectacular mountain scenery.

As the aircraft lifts up and heads towards the east, passengers’ don’t have to wait long to find out what is store for them there they are-the mountains as they always have been.

First to their far left visitor see   Gosaithan, also called shisha pahngma, standing at the majestic height of 8,013 m immediately to the right of Gosaithan there appears Doreje Lakpa (6,966 m),a mountain that looks like the number 8 lying down and covered with snow. To the right Dorge Lakpa is phurb-Ghyachu, which looms over the kathmnadu valley.

As the plane moves along, the mountains come closer and closer. Next on the vision is choba-bhamare , the smallest one of the lot at 5,933 m but singularly  stubborn as it has never been climbed. Then appears the mountain that is not only prominent in sight but also in spiritually-Gauri-shankar. Lord shiva and his consort Gauri are said to protect this mountain, at the proud height of 7,134 m and the summit had a history of unsuccessful attempts till 1979. Gauri-shankar is sharp and very conspicuous during the mountain flight.

As the plane moves towards the land of rising sun, the eastern Himalaya a succession of glorious mountains follows. Melungtse, a plateau like mountain stretches up to 7,023 m, chugimago at 6,297 m is still a virgin, waiting to be climbed. At 6,956 m, Number Mountain resembles a breast, maternal source in the sky providing pure milk to the shapes of the solu khumbu. Next is karyolung, an intensely white mountain that at 6,511 m gleams with the rising sun. Cho-oyu is the eighth highest mountain in the world. Reaching a height of 8,021 m, it appears stunningly beautiful from the aircraft.

Next on the menu is Gyanchungkang, at a majestic height of 7,952 m, considerd an extremely difficult climb. To the right of Gyanchungkang is pumori (7,161m). As passenger get closer to Everest. There is is Nuptse (7,855 m), which means west peak, signifying its direction from Everest. Finally there is everest (8,848  m) itself, known as Sagarmatha by the Nepalese and chomolungma by the Tibetans. Much as has already been written about Everest. But to actually witness it face to face during a mountain flight is something else. Even while it looms there in front of the eyes, it remains an enigma, this highest spot on the earth.

It's free and always will be.